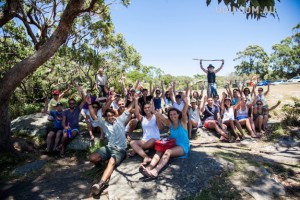 Case Study: Lawyers out in the wild!

MARQUE approached us with the brief:“We take staff away once a year for our annual “retreat” – and next year we’re looking to do something outdoors – with a difference.”  MARQUE informed us that their staff were young and intelligent, so it was vital that they kept engaged and challenged both mentally and physically. Also, they were expecting to go on holiday (they weren’t even told they were camping, as some had never spent the night outdoors before) so it was just important for them to be able to enjoy themselves, party a bit, and relax.

We gave them all that and more.

We looked after everything: transport, food, camping, games and activities. A great experience comes from the staff who deliver it. We had 5 great facilitators (3 of which were also professional photographers), 2 support crew, and a wizard!

The itinerary consisted of an adventurous day team building in the Royal National Park, including hilarious icebreakers, canoeing to a secret freshwater swimming hole, Iron-chef style lunch, creative and active team building games including boomerang throwing in the rainforest, time to swim and relax at the beach, and then the big challenge… climbing to the summit for this view (as well as surprise cold drinks and snacks provided by UDU): The adventure continued, with a delicious gourmet meal as the sunset, followed by night photography games on the beach and then on to the “Twilight Zone” for more fun before finally resting on the sand under the stars. The next morning was relaxing, which involved swimming, a feast of a breakfast, some mind/body exercises with our wizard, and a final goodbye.

We were proud of what we delivered. Most important to you though is what MARQUE had to say:

“UDU changed our lives! They took a bunch of lawyers under their wing and a long way out of our comfort zone, on a tailor-made weekend experience that included canoeing, trekking, climbing, swimming, competitive cooking, partying on the beach, sleeping under the stars and waking to a glorious sunrise and the smell of bacon and eggs. What made the difference was Andy and the UDU team, who had thought of everything, planned immaculately, where endlessly attentive and are just the nicest group of people you could meet. They were completely committed to the goal of giving us an unforgettable experience, and they delivered. “

Want to see all the photos of this adventure and more, check out our Facebook page!

We Will Tailor to you!

Have a specific question? Speak with us today!

We invite you to Understand the real Down Under. UDU doesn’t just take you to the best destinations; we believe it’s the experience you have there that matters.

Our tours are unique, but our guides make the difference. We specialise in private charter tours, by taking just your group we are able to tailor your tour. It’s your holiday, so we want to ensure you have the best experience possible.

Curious? For a quick, easy quote: